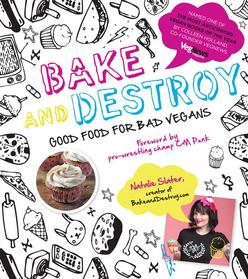 Natalie is the flip side of Martha Stewart, taking vegan cooking to places it has never been before.
Her self proclaimed cooking influences include TV, pro-wrestling, punk rock and heavy metal; the results are equally surprising—a refreshing take on great vegan baking with award-winning flavours, sure to create a buzz in the vegan community.
Her off-colour humour, irreverent rants and density of pop-culture references will make you laugh out loud and appreciate her version of high-adrenaline, off-the-grid baking. Her recipe list is different, maybe even shocking, but once the flavour combinations sink in, they are appealing, tempting and irresistible. For example the Bike Messenger Brownies are inspired by the espresso-infused chai latte these speed demons use to fuel up. She feeds her son The Crouching Corn Bread, Hidden Broccoli to get him to eat a vegetable. She affectionately describes her popular and colourful Fruit Punch Twinkies as “a little less white trash” since they are made from scratch. And it’s best to quote her directly on her Shepherd’s Pie Pizza, “Some people are born to rock n’ roll. Others are born to ride. I was born to put mashed potatoes on pizza.”

Author
Natalie Slater is the creator and writer of Bake and Destroy, "the food blog equivalent to a punch in the throat." She's a resident blogger at WTTW Chicago Tonight, and has served as a judge on Food Network's Cupcake Wars. She has written for Mint Magazine and Baking and Pastry International, and her recipes have appeared in Bust Magazine, Time Out Chicago and several online publications.
Selling Points

Over-the-top recipes bring something new and different to the vegan cookbook shelf. The author, whose blog gets 700,000 hits a month, just won the Cooking Channel’s Perfect 3 award.