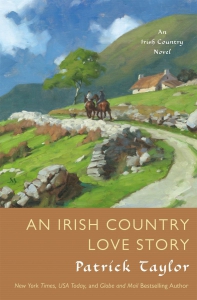 Description
It’s the winter of 1967 and snow is on the ground in the colourful Irish village of Ballybucklebo. But the chilly weather can’t stop love from warming hearts all over the county. Not just the love between a man and woman, as with young doctor, Barry Laverty, and his fiancee Sue Nolan, but also the love of an ailing pensioner for a faithful dog that's gone missing, the love of the local gentry for the great estate they are on verge of losing, or Doctor Fingal Flahertie O’Reilly’s deep and abiding love for his long-time home and practice. For decades, since the war, Number One Main Street has housed O’Reilly and his practice. In recent years, it has also opened its doors to O’Reilly’s wife, Barry Laverty, and a new addition to the practice, Doctor Nonie Stevens, an occasionally prickly young woman who may not be fitting in. It is to Number One that patients young and old come when they need a doctor’s care, for everything from the measles to a rare and baffling blood disease. An unexpected turn of events threatens to drive O’Reilly from his home for good, unless the entire village can rally behind their doctor and prove that love really can conquer all.
Previous Titles
AN IRISH COUNTRY DOCTOR 9780765316233, AN IRISH COUNTRY VILLAGE 9780765316240, AN IRISH COUNTRY DOCTOR 9780765319951, AN IRISH COUNTRY COOKBOOK 9780765382795, AN IRISH COUNTRY LOVE STORY 9780765382726, IRISH DOCTOR IN LOVE AND AT SEA 9780765378217, IRISH DOCTOR IN PEACE AND AT WAR 9780765371164, ONLY WOUNDED 9780765335234, WILY O'REILLY 9780765338389 and FINGAL O'REILLY IRISH DOCTOR 9780765370372
Selling Points
The eleventh heartwarming installment in Patrick Taylor's beloved and bestselling series!
« Back