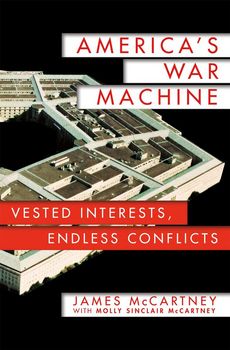 When President Dwight D. Eisenhower prepared to leave the White House in 1961, he did so with an ominous message for the American people about the "disastrous rise" of the military-industrial complex. Fifty years later, the complex has morphed into a virtually unstoppable war machine, one that dictates U.S. economic and foreign policy in a direct and substantial way.

Based on his experiences as an award-winning Washington-based reporter covering national security, James McCartney presents a compelling history, from the Cold War to present day that shows that the problem is far worse and far more wide-reaching than anything Eisenhower could have imaginined. Big Military has become "too big to fail" and has grown to envelope the nation's political, cultural and intellectual institutions. These centers of power and influence, including the now-complicit White House and Congress, have a vested interest in preparing and waging unnecessary wars. The authors pursuasively argue that not one foreign intervention in the past 50 years has made us or the world safer.

With additions by Molly Sinclair McCartney, a fellow journalist with 30 years of experience, America's War Machine provides the context for today's national security state and explains what can be done about it.

A veteran Washington reporter reveals how years of mililary-slanted domestic and foreign policy have turned the U.S. into a perpetual war machine