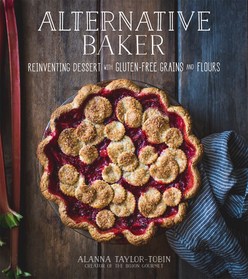 While most gluten-free baking cookbooks simply replace all-purpose wheat flour, usually with white rice, tapioca and potato flours, this book celebrates the wide array of grains, nuts and seeds that add unique texture and flavour to desserts. Recipes oust hard-to-find gums, such as guar and xanthan, and minimize starches, such as corn, tapioca and potato.

Author Alanna Taylor-Tobin is a classically trained pastry chef who has been developing recipes and techniques for her own gluten sensitivity for more than a decade. Her love of alternative, unrefined flours, sweeteners and organic produce is a product of her upbringing by health-nut hippie parents.