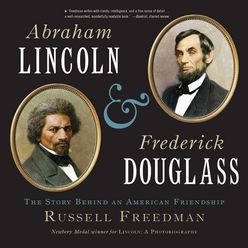 Abraham Lincoln and Frederick Douglass : The Story Behind an American Friendship

From the author of Lincoln: A Photobiography, comes a clear-sighted, carefully researched account of two surprisingly parallel lives and how they intersected at a critical moment in U.S. history. Abraham Lincoln and Frederick Douglass were both self-taught, both great readers and believers in the importance of literacy, both men born poor who by their own efforts reached positions of power and prominence. Lincoln as president of the United States and Douglass as the most famous and influential African American of his time. Though their meetings were few and brief, their exchange of ideas helped to end the Civil War, reunite the nation, and abolish slavery. Includes bibliography, source notes, and index.