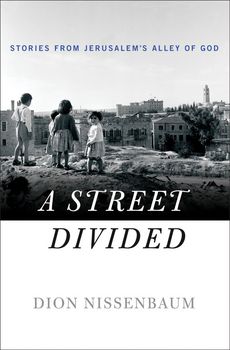 A Street Divided: Stories From Jerusalemâ€™s Alley of God

It has been the home to priests and prostitutes, poets and spies. It has been the stage for an improbable flirtation between an Israeli girl and a Palestinian boy living on opposite sides of the barbed wire that separated enemy nations. It has even been the scene of an unsolved international murder. This one-time shepherd's path between Jerusalem and Bethlehem has been a dividing line for decades. Arab families called it "al Mantiqa Haram." Jewish residents knew it as "shetach hefker." In both languages it meant the same thing: "the Forbidden Area." Peacekeepers that monitored the steep fault line dubbed it "Barbed Wire Alley." To folks on either side of the border, it was the same thing: A dangerous no-man's land separating warring nations and feuding cultures. The barbed wire came down in 1967. But it was soon supplanted by evermore formidable cultural, emotional and political barriers separating Arab and Jew.

For nearly two decades, coils of barbed wire ran right down the middle of what became Assael Street, marking the fissure between Israeli-controlled West Jerusalem and Jordanian-controlled East Jerusalem. In a beautiful narrative, A Street Divided offers a more intimate look at one road at the heart of the conflict, where inches really do matter.

An award-winning reporter for The Wall Street Journal takes us straight to the heart of the Israeli-Palestinian conflict, the 300-yard cul-de-sac that divides Jerusalem.