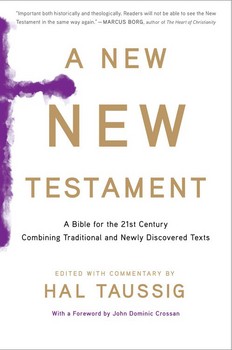 A New New Testament: A Bible for the Twenty-first Century Combining Traditional and Newly Discovered Texts

There are twenty-seven books in the traditional New Testament, but the early-Christian community was far more vibrant than that small number might lead you to think. In fact, many more scriptures were written and were just as important as the New Testament in shaping early-Christian communities and beliefs. Over the past century, many of those texts that were lost have been found and translated, yet they are rarely read in contemporary churches; they are discussed mainly by scholars or within a context only of gnostic gospels. In A New New Testament Hal Taussig seeks to change that.

This New Testament, and the accompanying commentary, promises to reinvigorate a centuries-old conversation and to bring new relevance to a dynamic tradition.