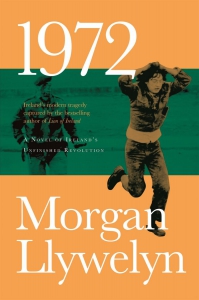 1972: A Novel of Ireland's Unfinished Revolution

Description
In 1972, Morgan Llywelyn tells the story of Ireland from 1950 to 1972 as seen through the eyes of young Barry Halloran, son and grandson of Irish revolutionaries. Following family tradition, at eighteen Barry joins the Irish Republican Army to help complete what he sees as the unfinished revolution. Issues are no longer as clear-cut as they once were. His first experience of violence in Northern Ireland shocks and disturbs him, yet he has found a sense of family in the Army that is hard to give up. He makes a partial break by becoming a photographer, visually documenting events in the north rather than participating. Events lead Barry into a totally different life from the one he expected, yet his allegiance to the ideal of a thirty-two-county Irish republic remains undimmed as the problems, and the violence, of Northern Ireland escalate. Then Barry finds himself in the middle of the most horrific event of all: Bloody Sunday in Derry, 1972.
Previous Titles
1916: A Novel of the Irish Rebellion 9780765386144, Only the Stones Survive: A Novel 9780765337924 (Hardback) and 9780765337931 (Paperback),
Selling Points
In 1972, the fourth volume in the acclaimed Irish Century series, Ireland's unfinished revolution is brought to thrilling life by a master.
« Back